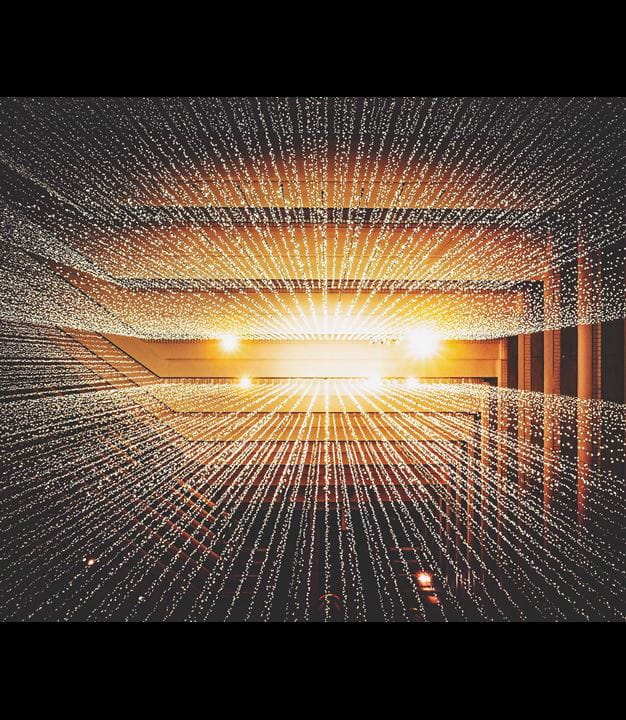 User interface (UI) testing is a process that simulates user interactions with a website in order to test if the application is functioning correctly. UI testing can be performed manually by a human tester, or it can be performed automatically using software.

Furthermore, automated UI tests can run simultaneously on different platforms and on different browsers. However, they will not detect cases where the UI gets distorted. As soon as all DOM elements are in the document, the test will succeed. Automated UI tests become much more important when there are multiple people working on the same piece of code.

One of the biggest benefits of automated UI testing is finding regression errors in order to ensure that new code doesn’t break or change the existing functionality.

Selenium is a portable framework for testing web applications. Selenium provides a playback tool for authoring functional tests without the need to learn a test scripting language (Selenium IDE). It also provides a test domain-specific language (Selenese) to write tests in a number of popular programming languages, including C#, Groovy, Java, Perl, PHP, Python, Ruby, and Scala. The tests can then run against most modern web browsers. Selenium runs on Windows, Linux, and macOS. It is open-source software released under the Apache License 2.0.

NUnit is an open-source unit testing framework for the .NET Framework and Mono. It serves the same purpose as JUnit does in the Java world and is one of many programs in the xUnit family.

NUnit provides a console runner (nunit3-console.exe), which is used for batch execution of tests. The console runner works through the NUnit Test Engine, which provides it with the ability to load, explore, and execute tests. When tests are to be run in a separate process, the engine makes use of the nunit-agent program to run them.

The NUnitLite runner may be used in situations where a simpler runner is more suitable. It allows developers to create self-executing tests.

Jenkins is a free and open source automation server. Jenkins helps to automate the non-human part of the software development process, with continuous integration and facilitating technical aspects of continuous delivery. It is a server-based system that runs in servlet containers such as Apache Tomcat. It supports version control tools, including AccuRev, CVS, Subversion, Git, Mercurial, Perforce, TD/OMS, ClearCase, and RTC and can execute Apache Ant, Apache Maven, and sbt-based projects as well as arbitrary shell scripts and Windows batch commands. The creator of Jenkins is Kohsuke Kawaguchi. Released under the MIT License, Jenkins is free software.

The ability to run tests on remote browser instances is useful to spread the load of testing across several machines and to run tests in browsers running on different platforms or operating systems. The latter is particularly useful in cases where not all browsers to be used for testing can run on the same platform.

The first step in the workflow of the automated tests is the definition of the test. We need to define what we are going to test. The most common elements that we check are:

We can create an individual test definition based in each use case, or create a general test plan with related tests. We can do it manually, through a document, Confluence, or using a tool.

After we document our tests, it’s time to set up our test environment. On oshyn.com we use Selenium Driver for C# . Selenium is an open-source, web automation testing tool that supports multiple browsers and multiple operating systems. It allows testers to use multiple programming languages such as Java, C#, Python, .Net, Ruby, PHP, and Perl for coding automated tests. We can easily install Selenium Web Driver on a Visual Studio using the Nuget Package Manager and searching for Selenium.WebDriver by Selenium Committers.

Using Selenium official documentation we can set up the Web Driver for our project. In our case C#, which you can see in the following image:

Once we have our Selenium Web Driver successfully installed, we can start to define our test based on our test specifications. The most recommended way is to integrate our UI Test with NUnit. NUnit is a unit-testing framework for all .Net languages. Initially ported from JUnit, the current production release, version 3, has been completely rewritten with many new features and support for a wide range of .NET platforms. It’s open source software released under the MIT license and is part of xUnit family.

In the image bellow we can check two tests defined using NUnit for our home page: 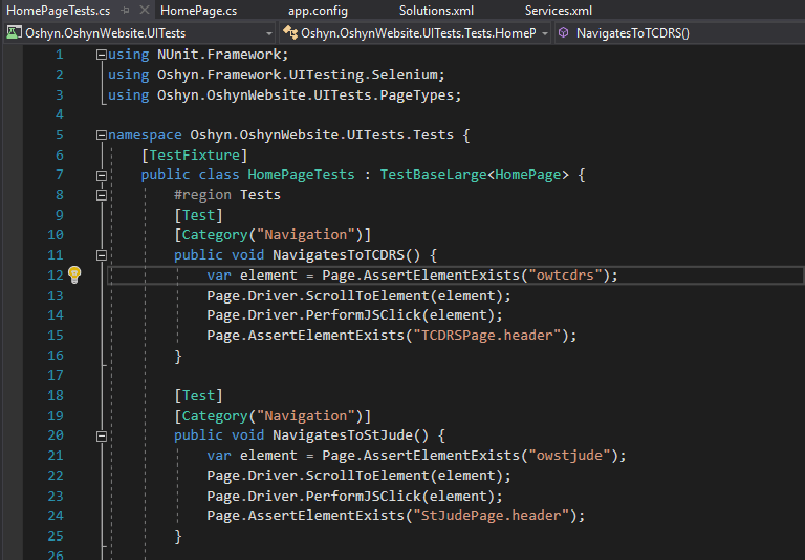 And, as you can see, we have a Base Page class for each PageTests class. This way it’s easier to maintain our tests and separate the logic of the tests from the additional page related logic that we need to use to accomplish our test. (See next image) 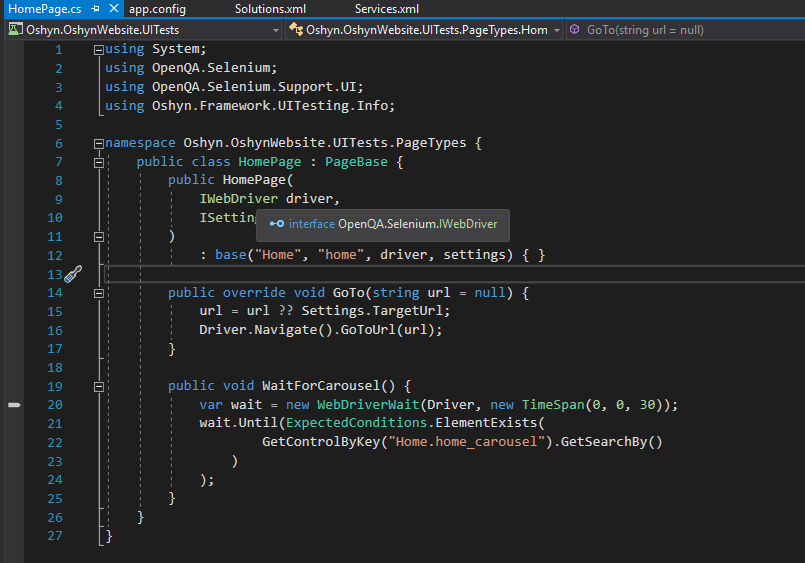 A very important step in the UI tests is the controls definitions that we use for our tests. The controls are the elements that the Web Driver uses to interact with our site. In Selenium automation, if the elements are not found by the general locators like id, class, name, etc. then XPath is used to find an element on the web page. Defining these elements in a separate place from our test logic is very good practice. Doing this avoids affecting the test logic when we change the element or the element location. 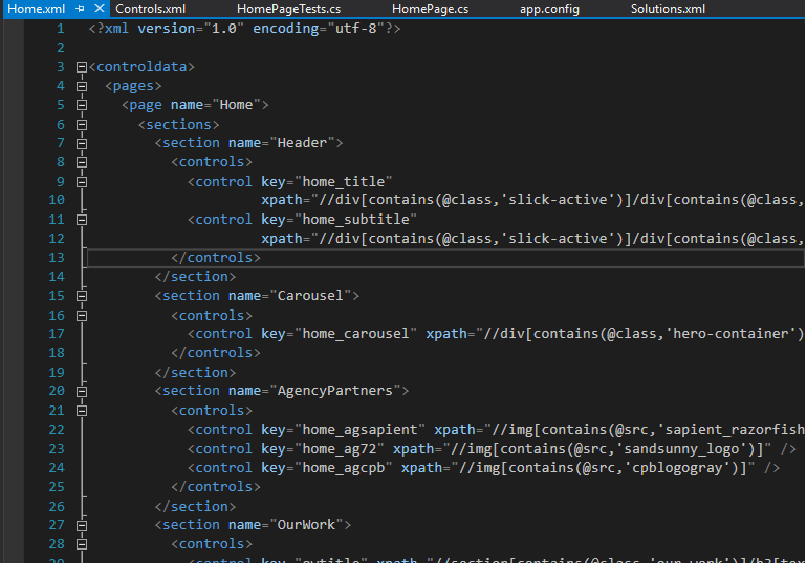 The last step in our UI test flow is to run the tests. With Visual Studio this is really simple. You need to open the Test Explorer, which can be accessed under the Test Menu (Ctrl + E, T). After a quick scan, you are going to see all the tests under your project. You can run them all, or select a single one or a group. You are going to see a green circle icon if the test successfully passed or a red circle icon if the test fails. If it fails, you will also see a description of the cause of the failure. 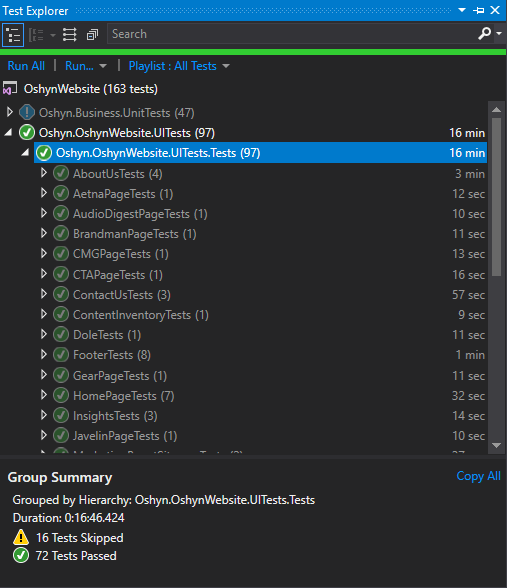 Deploying and running tests with Jenkins against the grid

If you work within a continuous integration or continuous delivery environment, the integration of the UI test process becomes really powerful. Jenkins is an excellent bet to set up your integration environment. It offers a simple way to set up for almost any combination of languages and source code repositories using pipelines. It also can automate other routine development tasks, like in this case, integration tests. While Jenkins doesn’t eliminate the need to create scripts for individual steps, it does give you a faster and more robust way to integrate your entire chain of build, test, and deployment tools than you can easily build yourself.

You can add nunit3-console after finishing any environment build using your tests-library.dll as a source and running your tests against a local or remote environment. A good call is to run your tests pointing to a Selenium Grid. Selenium Grid uses a hub-node concept where you only run the test on a single machine called a hub, but the execution will be done by different machines called nodes. So in this case you can set up different configurations for your tests, like browsers, operating systems, and browsers versions.

The UI testing process is of great importance in the software development process. It validates how your website interacts with the final user. It tests the application by considering usability, making sure that all the functionality of the site is easy to understand and use (e.g. navigate between pages). A good UI test reflects a complete user interaction with the site, and should be simple and clean. A UI test also checks for errors. It automatically tests and validates all possible scenarios according to the project requirements. Finally, you have a complete validation of the look-and-feel of the application. (This can only be accomplished with UI Tests. Unit tests can also check the first two.) For example, you can validate that all the images on your site are visible, that the color combinations match the specs, or if the required fields are correctly validated and can be seen by the user, etc.

Ultimately the client or user is the person who is actually going to use the application. It is critical to test all aspects of the UI, so they will not have any problems using your site or application.